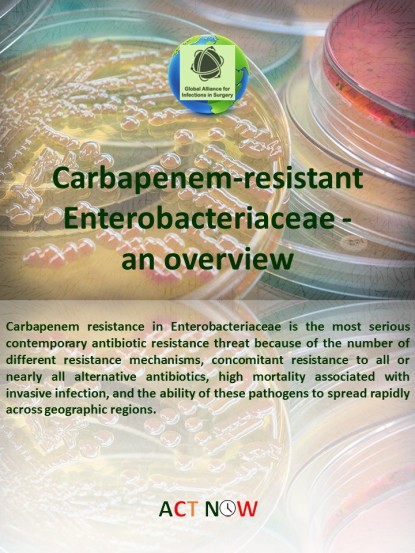 Carbapenem resistance in Enterobacteriaceae is the most serious contemporary antibiotic resistance threat because of the number of different resistance mechanisms, concomitant resistance to all or nearly all alternative antibiotics, high mortality associated with invasive infection, and the ability of these pathogens to spread rapidly across geographic regions. Although initial reports described that carbapenem resistance in Enterobacteriaceae  was due to over production of AmpC-mediated β-lactamases or extended-spectrum β-lactamases (ESBLs) in organisms with porin mutations, Klebsiella pneumoniae carbapenemase (KPC) represent now the most common mechanism of Carbapenem resistance in Enterobacteriaceae. KPC, an Ambler molecular class A enzyme that utilizes serine at the active site to facilitate hydrolysis of a broad variety of β-lactams is now a major challenge in antimicrobial resistance. The first plasmid-encoded serine carbapenemase in the KPC enzyme family was discovered in the USA in 1996 and reported in 2001. Since then, KPCs have spread and become endemic in many regions of the world.  The rapid global dissemination of KPC genes is staggering. This  can be attributed to a of three major mechanisms: international travel, patient-to-patient transmission of KPC-producing organisms, and interspecies transfer of KPC-resistant elements. Horizontal transfer of KPC resistance is a fascinating microbiological phenomenon that has devastating public health implications. A major concern is the emergence of colistin resistant KPC-positive Klebsiella pneumoniae isolates. This is of particular clinical relevance, as colistin is currently a key component of treatment combinations.

KPCs-producing carbapenem-resistant Enterobacteriaceae are becoming an increasingly significant problem worldwide and pose a serious threat in clinical situations where administration of effective empiric antibiotics is essential to prevent mortality following bacteraemia and infections in immunocompromised patients including organ transplant recipients and those with cancer.

The Ambler class B metallo-β-lactamases (MBLs) differ from other carbapenemases by the utilization of zinc at the active site to facilitate hydrolysis. Although MBLs have been described in Pseudomonas species, they may be other causes of carbapenem resistance in some areas of the world. The most common metallo-beta-lactamase families include the IMP, VIM and NDM. A currently emerging MBL is the NDM (New Delhi metallo-beta-lactamase). NDM-1 was first detected in 2008 in a patient returning to Sweden from India. NDM-1 has been shown to be present at significant frequency within Enterobacteriaceae in India and has subsequently been shown to be present in bacterial isolates in several countries worldwide.

Carbapenem resistance in Enterobacteriaceae is an emerging phenomenon posing a threat to public health. As carbapenems have long been considered the antibiotic class of last resort in the treatment of infections caused by multidrug-resistant Gram-negative bacteria, the dissemination of carbapenem resistance has been declared a “global sentinel event”. Carbapenem-resistant Enterobacteriaceae (CRE) can colonise or infect not only those patients who are debilitated, immunocompromised or critically ill, but also those who were previously healthy and became colonised or infected in healthcare settings practicing poor infection control. Although the transmission of multidrug-resistant organisms is frequently observed in acute care facilities, all healthcare settings are affected by the emergence of drug-resistant pathogens. The presence of CRE carriage has been described in patients from postacute care facilities, particularly long-term acute care hospitals showing to be a major contributor to its dissemination in multiple locales. Carriage of CRE  in the gastrointestinal tract is important for two reasons. First, it may precede and possibly serve as a source for subsequent clinical infection. Second, carriers may serve as an important reservoir for dissemination of CRE in healthcare facilities. Colonization with CRE usually precedes infection; patients acquire colonization in healthcare settings, presumably via cross-transmission after breaches in infection prevention measures such as healthcare-worker hand hygiene. Although core measures which include standard precautions, should be applied to all patients admitted to a healthcare setting, regardless of known or suspected CRE carrier status, identifying “at-risk” carriers of CRE should be performed on admission to the healthcare setting by the frontline healthcare worker admitting the patient. In studies evaluating risk factors for CRE acquisition or infection, exposure to health care and antibiotics are among the most prominent risks. However, known history of previous carriage of CRE in the last 12 months and an epidemiological linkage to a person known to be a carrier of CRE always need supplemental measures such as:

If the result of the active screening is positive for CRE, the measures (patient isolation and contact precautions) should be continued. If the results of active screening are negative for CRE and there is no other indication to continue contact precautions can be discontinued, but core measures should be continued. When patients have a positive microbiological result, from either active screening or a clinical culture, the microbiology laboratory should communicate positive results timely, the prevention measures (patient isolation and contact precautions) should be activated or continued  and the patient’s contacts should be always screened for CRE carriage. Multiple antibiotic classes have been identified as possible risk factors for infection or colonization with CRE. Therefore, antimicrobial stewardship should be directed toward an overall decrease in antimicrobial use rather than targeting a specific antimicrobial class. Different authors have analysed the effect of antimicrobial consumption on colonisation by MDR strains in these units, and have found a clear association between the individual consumption of antipseudomonal drugs and colonisation or infection by MR P. aeruginosa or A. baumannii strains. However, even though  the effect of administering antimicrobials on the rate of K. pneumoniae colonisation in these units has been little studied, new reports demonstrated an association between the global consumption of carbapenems and cephalosporins, and colonisation in the month following the intervention. Limiting use of invasive devices is another potentially important intervention for CRE prevention. CRE have been identified from device-associated infections, particularly catheter-associated urinary tract infections. For urinary catheters, prevention efforts include inserting catheters only in those patients with appropriate indications and removing them as soon as possible, using aseptic technique and sterile equipment for insertion, and maintaining a sterile closed drainage system.

Management of antimicrobial resistance in CRE is a major challenge for clinicians. The optimal treatment option for CRE infections is still not well established. Combination therapies including high-dose meropenem, colistin, fosfomycin, tigecycline, and aminoglycosides are widely used, with suboptimal results. More recently, ceftazidime/avibactam, eravacycline, meropenem/vaborbactam, and plazomicin have become available. These agents have specific in vitro anti-CRE activity. Plazomicin has broad activity regardless of carbapenemase but is inactivated by 16S rRNA ribosomal methyltransferases that are present in some New Delhi metallo-β-lactamases producing CPE. Meropenem/vaborbactam is active against KPC-producing CPE, and ceftazidime/avibactam inhibits KPC and OXA-48-like carbapenemases. Eravacycline is a fluorocycline antibiotic similar in structure to tigecycline with activity against CRE.  In addition, there are several other anti-CRE agents in the pipeline, including cefiderocol, imipenem/relebactam, and meropenem/nacubactam.

Fortunately, several new drugs that target CRE have been approved or are in late stages of development. However, further pragmatic studies are needed to elucidate their place in therapy and their impact on real-world outcomes such as length of stay and mortality, especially for critically ill patients. Moreover, although many reviews have been written, their precise role as an empiric treatment remains to be defined. Cautious clinical use is advised, until their precise roles are further defined as empirical treatment.